Fathers on the Front Line

Meet the Ukrainian priests who found their calling while preaching from the trenches of their country’s bitter conflict with Russia.

IN A SMALL CHAPEL in eastern Ukraine, at a military base near the front line of the country’s ongoing conflict with Russia, there was a sign that read: “With Prayer and Fasting We Can End the War.”

One Ukrainian soldier, who was helping to set up the chapel in March, looked at the sign. “Better with a Kalashnikov,” he said.

The chapel is tucked inside a housing facility in an area known as Svitlodarska Duha, and can fit only half a dozen soldiers at a time. But the Ukrainian military chaplains who set it up believe that providing a space for worship, no matter how small, is an important part of their job—an often-overlooked support role in a traumatizing, ongoing conflict. In the five years since the war between Ukraine and Russia began, it has claimed approximately 13,000 lives, and the eastern part of Ukraine, which divides the Russian-supported breakaway regions from the rest of the country, has become a heavily armed border zone, dotted with trenches, destroyed homes, and broken lives.

“Some say the work of a chaplain is just to show up in the trench, lift spirits, give out hugs, present an icon, and say all will be well and I will pray for you. But the duty of a chaplain is much deeper and much more serious … you know that if you do something incorrectly, or say something improper, that you can hurt [the soldier] or his family. There can be consequences of unknown proportions.” —Father Andrii Okrepkyi

The current conflict between the two countries began in 2014. In November 2013, the Ukrainian government had bowed to Russian pressure and refused to sign a comprehensive trade agreement with the European Union, sparking mass protests across Ukraine that erupted into the Euromaidan Revolution. The revolution was not centered around a particular leader or ideology; instead, the demonstrators demanded an end to pervasive corruption—for their country to move toward a more democratic future. But in February 2014, Russia invaded Ukraine via the Crimean peninsula in the south and then, two months later, from the east, where the majority of the residents are Russian speakers. Eastern Ukraine has been embroiled in war ever since.

In 2014, the country was teetering on the verge of bankruptcy and had only around 6,000 troops ready for rapid deployment. The Ukrainian military, formed when the nation had declared its independence from the Soviet Union in 1991, had been gutted by economic collapse and more than two decades of endemic corruption. It had also given up its nuclear weapons arsenal—once one of the largest in the world—in 1994. So when, two decades later, Russia invaded, organized a sham referendum, and annexed Crimea, Ukraine was hardly in a position to defend itself.

“When you are on the front—not somewhere on a base, but on the front—you feel that you are instantly needed and that you can do something.” —Father Oleksandr Lushenko

DURING THE FIRST YEARS OF THE WAR, a wave of patriotic volunteerism swept Ukraine. Citizens donated food and raised money to purchase equipment for the soldiers, like night vision goggles and vehicles. Others became volunteer combatants, combat medics and chaplains. As the years went on and the conflict ramped up, troops’ numbers increased and the priests stayed on, tending to soldiers’ spiritual needs by providing counsel and overseeing religious ceremonies—even helping to transport food and medical supplies.

Religion means more than just comfort for Ukrainian soldiers. It’s entwined with national identity, and the war has helped to accelerate major changes to Ukraine’s religious institutions: This past January, a new, unified Orthodox Church of Ukraine was granted independence by the Ecumenical Patriarchate of Constantinople. (Approximately 70 percent of Ukrainians follow Orthodox Christian traditions.) Some worried that the creation of the new church—which represented a split from the Russian Orthodox Church—would ramp up the violence, but the transition has been mostly without incident so far—a major victory for Ukrainian sovereignty.

The chapel in Svitlodarska Duha is the work of two 30-year-old Ukrainian priests from two different denominations: Father Andrii Okrepkyi, who is Ukrainian-Greek Catholic, and Father Oleksandr Lushenko, who is Ukrainian Orthodox. The duo share a special bond, thanks to their shared faith and patriotism, but they rarely see one another; they often work separately within their brigade’s area of operation, along a section of the approximately 285-mile-long front line.

Father Okrepkyi sees his and Father Lushenko’s roles as integral to a new way of thinking about soldiers in the country. “A soldier was looked at like a piece of hardware, like a piece of an automatic weapon which when it broke down was thrown away and a new one was taken out,” he explains. “Now we have a different approach to soldiers because we see them as individuals. They are, first of all, a part of our society.”

“God gave life and God has the right to take it. When a person kills, this is the essence of murder. I think that we have to explain it this way: we are not killing or taking away the life of the soldiers who are attacking us. We are protecting those who are behind us … If we were the invaders on the attack, then it would be a sin.” —Father Okrepkyi

Photography and text by Joseph Sywenkyj—Redux 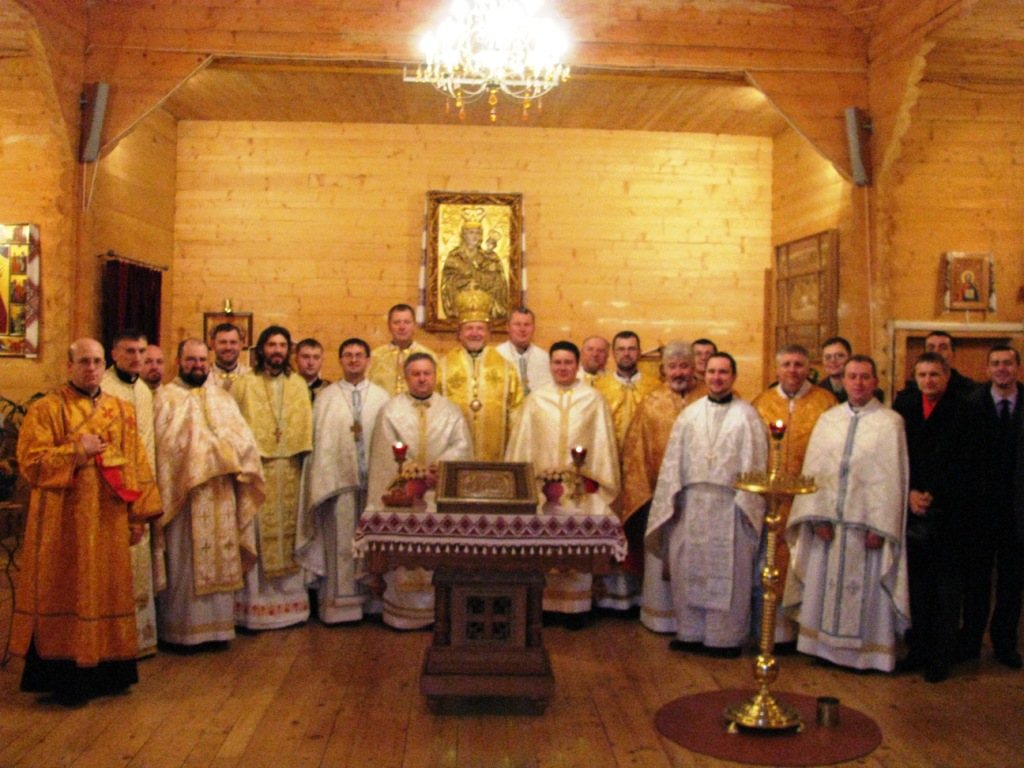 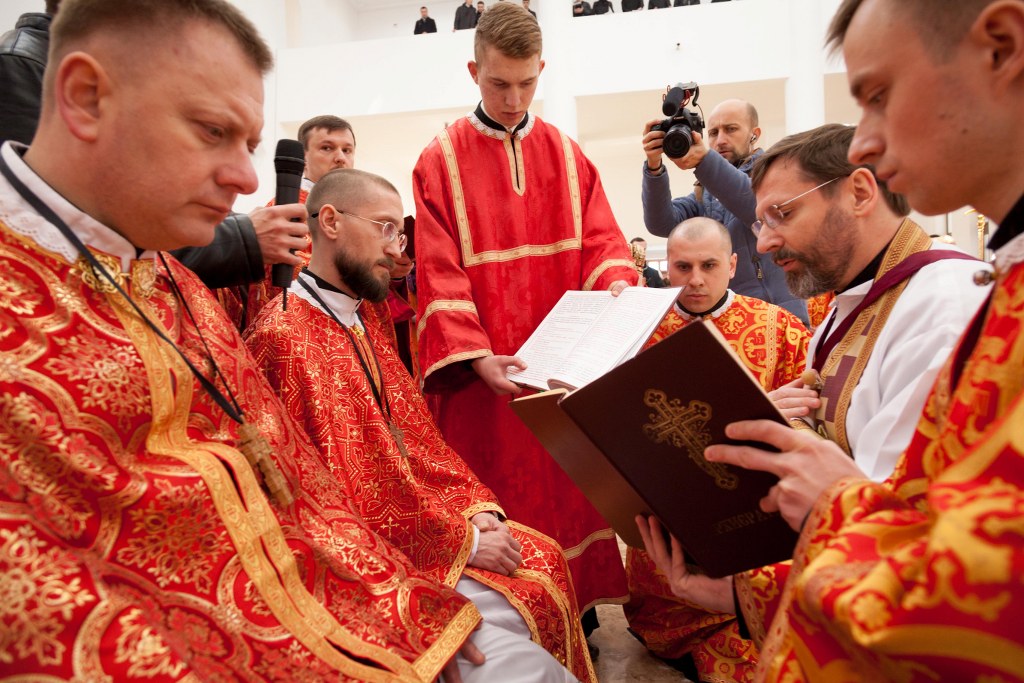 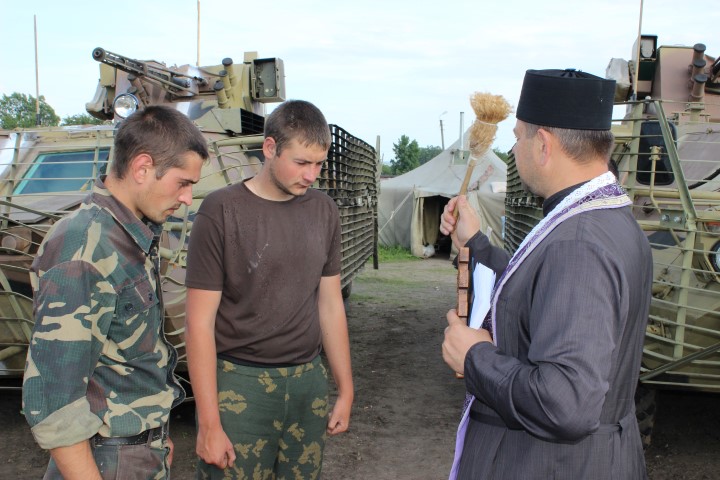 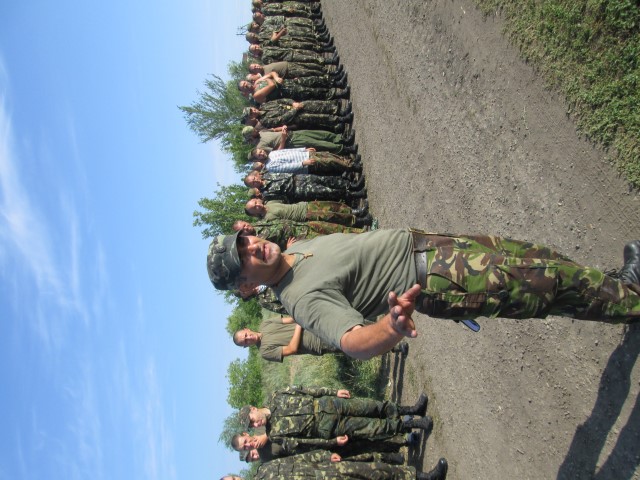 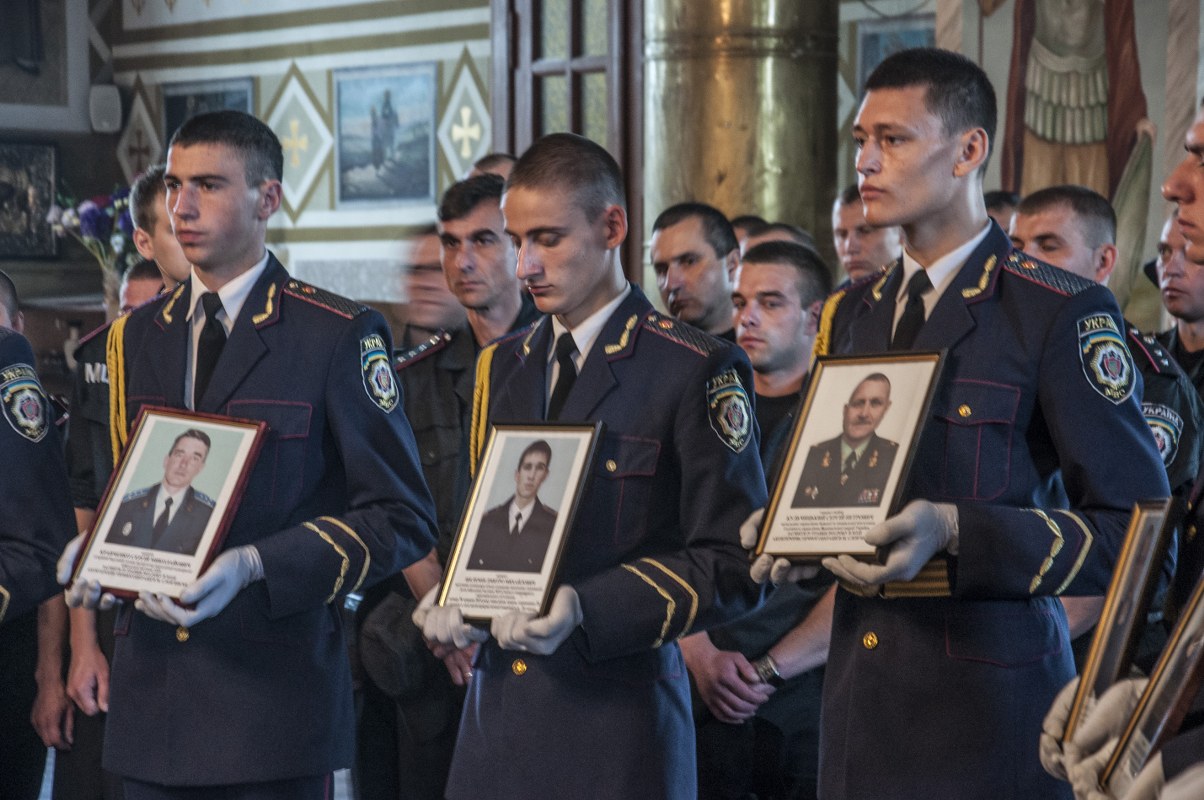 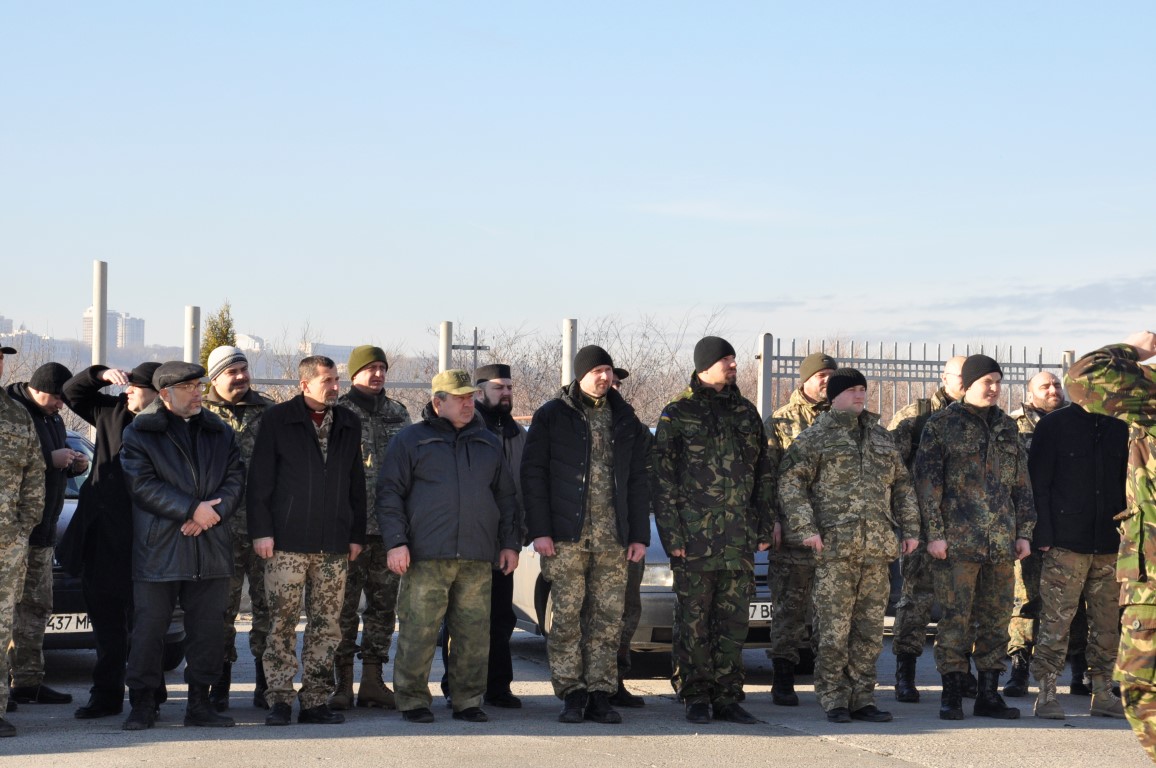 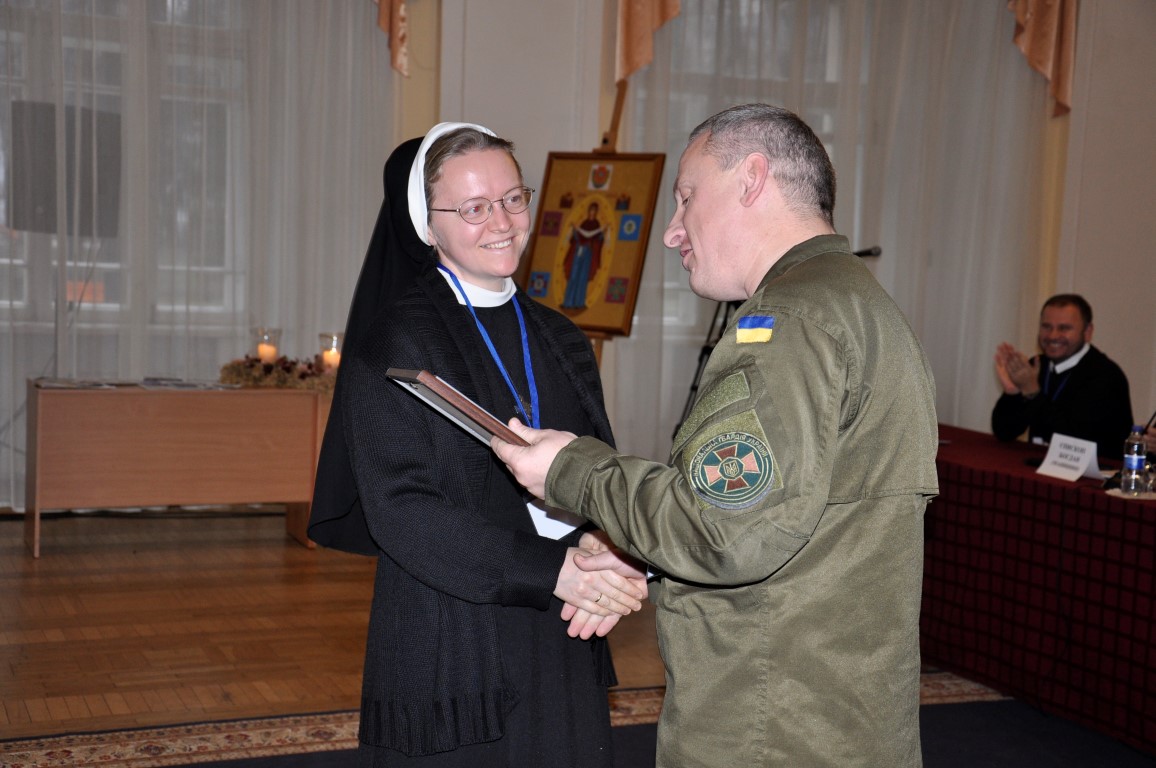 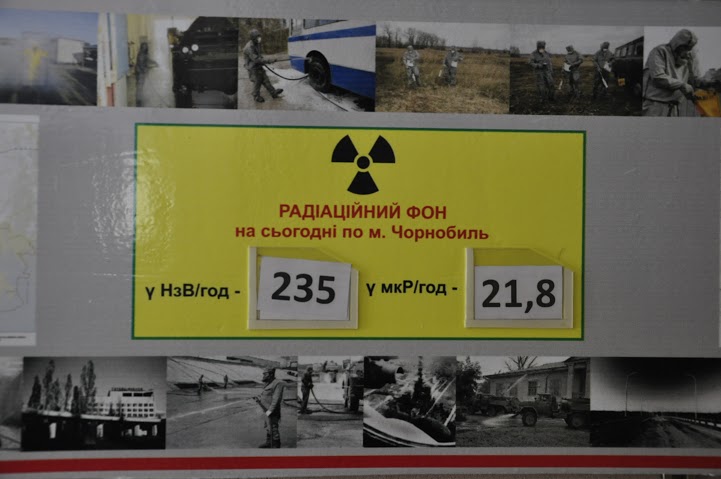